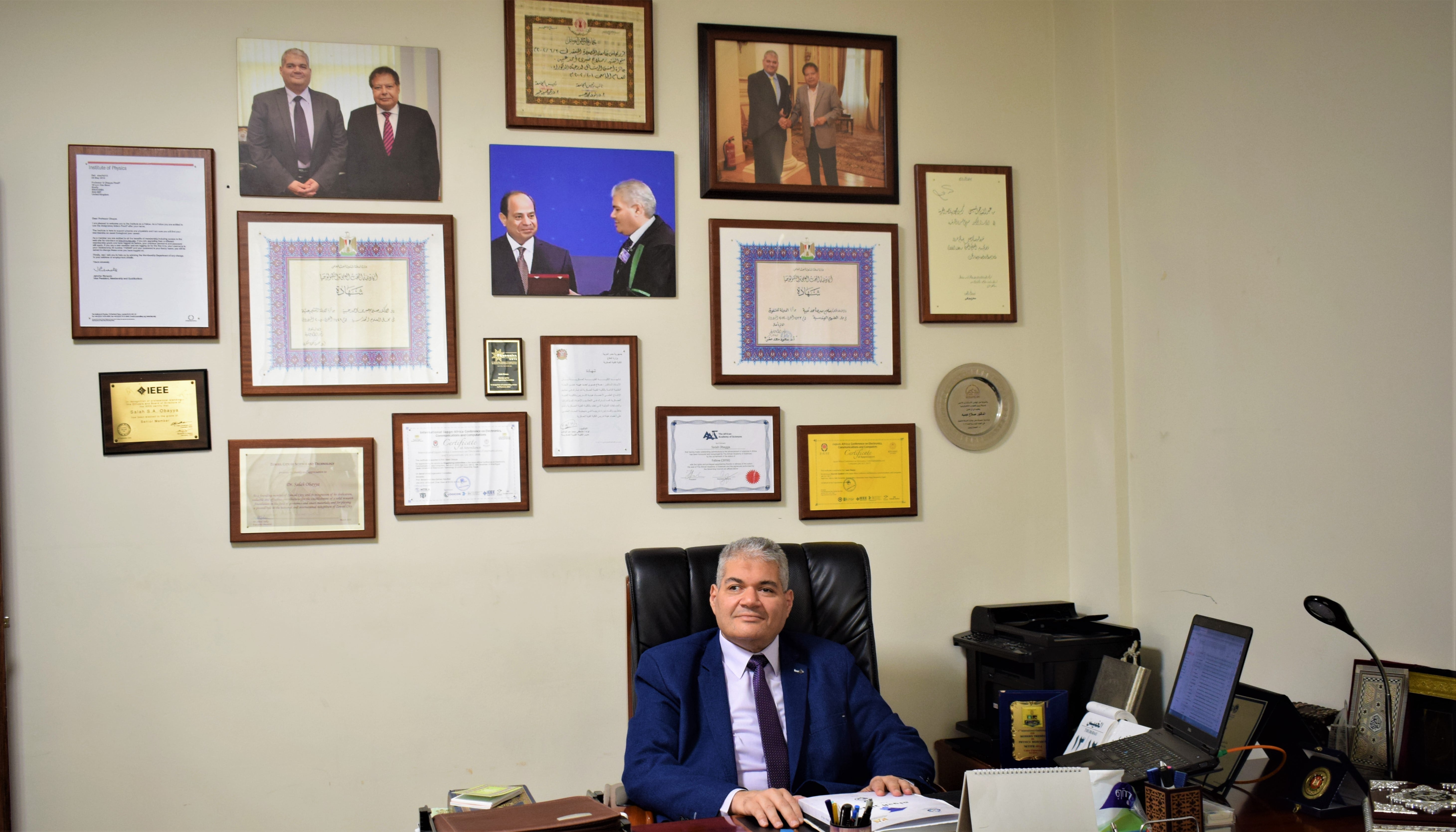 Each year, one of the world’s leading pioneers in the field of Computational Electromagnetics receives this award. During the previous years, distinguished professors from the Universities of UCLA, Illinois Urbana-Champaign, and Michigan, some of the top universities in the world and the U.S. in the field of engineering, have received this award.

The ACES Computational Electromagnetics Award has been bestowed by the Board of Directors upon Professor Obayya to honor his career achievements and substantial, major contributions in the field of computational electromagnetics.

Dr. Salah Obayya, the founding director of the Center for Photonics and Smart Materials, and the Vice-Chair for Academic Affairs in Zewail City expressed his gratitude and deep thanks to his research team at the Center for Photonics and Smart Materials in Zewail City, as well as postgraduate students with master's and doctoral degrees, whom he supervised in Egypt and Britain, some of whom now occupy prestigious positions in universities and specialized companies in various countries of the world.

Zewail City of Science and Technology extends the warmest congratulations to Professor Obayaa, and wishes him all success in his scientific career and future endeavors.

Professor Salah is now Chair Professor and Founding Director of the Center for Photonics and Smart Materials (CPSM). Previously, he was the Vice-Chair for Academic Affairs and Director-General of Research Institutes at the same institution. Prior to Zewail City, he took up several academic posts at Brunel University UK (tenured Associate Professor, 2002), University of Leeds, UK (tenured Professor, 2006), and the University of South Wales, UK (tenured Chair Professor, 2008) where he was the Founding Director of Photonics and Broadband Communications (PBC) Research Center and also he was the Director of Postgraduate Programs at the same institution. In May 2006, he has been naturalised as “British” citizen

Dr. Obayya was elected as the first Arab and African Fellow of Optical Society of America (OSA) in Sep. 2019, and IEEE Fellow of IEEE Photonics Society, January 2021, Fellow of African Academy of Science (AAS), 2018, Fellow of the Institute of Engineering and Technology, IET (formerly FIEE), UK, 2010, elected Fellow of The Institute of Physics (IoP), UK, 2010, elected Fellow of The Higher Education Academy, UK, and Senior member of IEEE, USA, 2005, member of Board of Academy of Scientific Research and Technology (Egypt’s National Academy of Science), Member of Wales Institute of Mathematical and Computational Sciences (WIMCS), UK, Member of Optical Society of America (OSA), Member of International Society for Optical Engineering (SPIE), USA and Member of Applied Computational Electromganetic Society (ACES).

As remarkable recognition of his research achievements, he was the recipient of many national and international awards and recognitions such as Medal of Science and Arts of the first class, Egypt, 2019, Best Scientific Book, COMSTECH-Awards-2017, 2019, State Appreciation Award, Egypt, 2019, UNESCO Chair, Paris, 2019, Honorary Chair Professor of Photonics, University of Nottingham, UK, 2017, for his outstanding world-class research record, elected Senior Associate by Board of Directors, International Center for Theoretical Physics (ICTP), Italy, 2017, for his pivotal role in photonics research and education in Egypt, The Region and Africa and elected Senior Member by Board of Directors, Optical Society of America, OSA, 2017 for his internationally recognized research in Photonics, UAE President Khalifa Award for Distinguished Arab Professor in Scientific Research in April 2017, Doctor of Science (DSc) degree in Photonics from City University of London in Jan 2016; a degree awarded only to those who gained international distinction in their own fields, Arab Thought Foundation Award in Scientific Creativity (Lebanon), Dec. 2015; only one award in all fields of Science and Engineering is granted each year for one Arab Scientist, Egyptian Academy of Scientific Research and Technology (ASRT) Award in Engineering Sciences Creativity, Sept. 2014; only one award is granted each year for an Egyptian Scientist in Engineering Sciences, Abdul Hameed Shoman Foundation (Jordan) Award for Arab Scientists in Engineering Sciences, Oct. 2014; only one award is granted each year for one Arab Scientists in Engineering Sciences, State Award of Excellence for Engineering Sciences from the Egyptian State, Sept. 2013; only one scientist is awarded this prestigious award every year, Incentive State Award for Engineering Sciences from the Egyptian State, Sept. 2005, and many others.